20.05.2016
0
Legend Beyond Georgian History
Legends play a big role
in every country’s history. True or not, they are interesting and always leave some
kind of mystery about a place in our mind and they create a certain picture
that memorizes in our head.
History of Georgia
takes a root from ancient times and has thousands of legends about people,
places, food, treasures etc. Some of them may be unbelievable, while others
play a big role in our country’s history. I want to tell you about legend of
Prometheus.
Legend of Prometheus 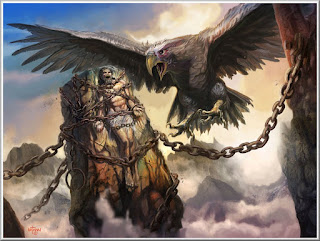 The legend goes that
Prometheus was a son of titan Lapetus and Clymene. After gods defeated titans,
Prometheus took a part of humans and in every legend, he is a benefactor and great
supporter of mankind. This action of course infuriated Zeus. But confrontation
between these two went beyond that.

According to the one version of legend, once
In Mecone a question of sacrifice ceremonies came up – which part of animal
should be accrued to the Gods and which should be left for humans. Prometheus
tricked Zeus by cutting a bull into two pieces – one was inedible part (bones
covered with fat) and the other one was meat covered with animal skin and
malodorous stomach.  Zeus was deceived by
mistakenly choosing bones. Furious Zeus punished humankind by taking fire from
people. 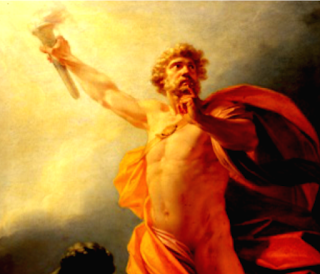 After that Prometheus
stole fire from Hephaestus, took away from Olympus and gave it to people,
showing them how to save it.
For disobedience to
Zeus and stealing fire from Olympus, he ordered Hephaestus to nail Prometheus
to the Rocks of Caucasus Mountains where he would suffer eternally. Chained
Prometheus was doomed to incessant torment – permanently the eagle flied over eating
his liver. This lasted throughout several hundred to 30 thousand years while
Heracles did not kill the eagle and freed Prometheus.

According to the legend
the exact location of this place was Khvamli Mountain– limestone massif in
western Georgia. The territory of Khvamli is a protected area in Georgia and
borders with the Tvishi DAM, which is projected to serve the proposed
Namakhvani Hydro Power Plant cascade.

Here in Georgia there
are caves named after Prometheus. Discovered in Imereti region in 1984,
Prometheus Cave is one of Georgia’s natural wonders providing visitors with
breathtaking examples of stalactites, stalagmites, curtains, petrified
waterfalls, cave pearls, underground rivers, and lakes.
Travelers in Georgia
are able to see both Khvamli Mountain and Prometheus caves.